I finally took the time to start a little something with Inky! 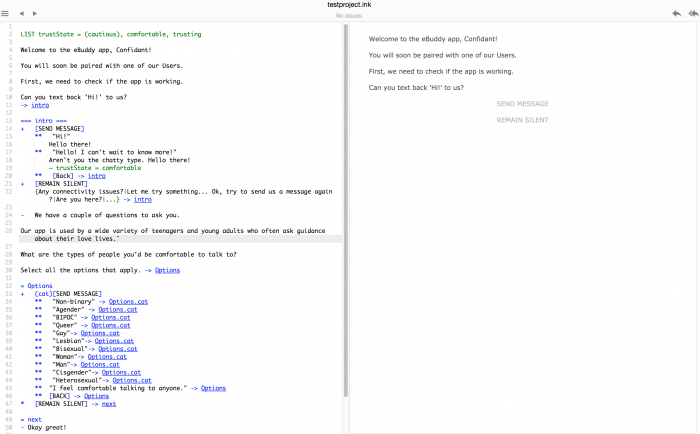 I haven’t got very far.

The game’s entry point is a ‘tutorial’. It’s a conversation between the ‘app moderators’ (eBuddy, referring themselves as ‘we’) and the ‘Confidant’ (who just got hired and will be paired with someone right after that first conversation).

It’s showing the choice structure for the whole game:

The intent is to try to mimic how we deal with text messages usually… First decision is to say something or wait. Then choose what to say. But when you choose to say something you’re already half-way. And again, I’m obsessed with timing so what you say is less relevant than when you say it.

Like there was an earlier version of the conversation I wrote that went as follows:

In the end I removed the ‘You’re messing with us aren’t you?’ because I wondered if the Moderators should be a tad more neutral in tone… but as I’m writing this journal, yeah, in fact I’m bringing back that line. It gives more flavor to the Moderators. And why not after all?

I’ve created 3 different ‘trustState’ at the moment — things I’ll use to create mini-variants in the text. I vaguely thought of assigning different adjectives to the different characters in the story, but in the end, these trustState are always contextual and conversational. They’re more tied to a situation than being a specific attribute to a character, so I think it’s fine to switch between them as things go. I’ll probably track other states for other things (based on characters’ memories of previous answers) but we’ll see. I’m not even sure I need that. That’s the fun part of writing to me — a same sentence can have so many different meanings depending on what was said before (like the Aren’t you the chatty type) and most of the time I don’t even need to emphasize that — the players will make these links themselves. The challenge is to write things that are elusive enough to be interpreted in different ways, while not writing something too obscure or vague that would lead to various misunderstandings.